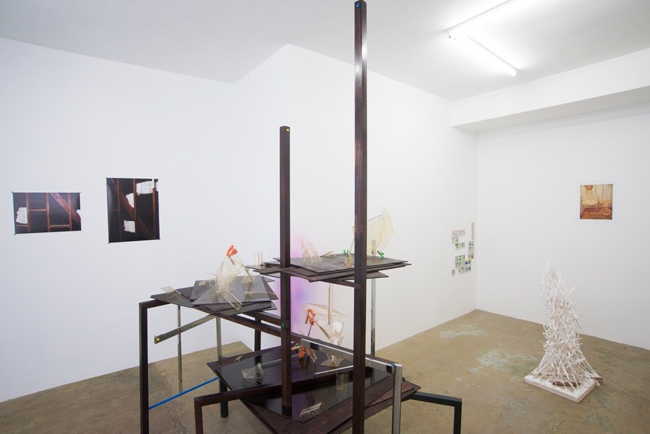 Los Angeles, June 29, 2013 — DE LA CRUZ PROJECTS is pleased to announce that independent curator Omar López-Chahoud has joined our leadership team as Curatorial Advisor. Most notably, López-Chahoud is Artistic Director of the UNTITLED art fair in Miami Beach, which held its inaugural edition last December. Having earned a Masters in Fine Arts from both the Yale University School of Art and the Royal Academy of Art in London, López-Chahoud has worked consistently over the last fifteen years as an independent curator, writer, and lecturer in New York City and internationally.
López-Chahoud states:
“This is a great opportunity to work with the most interesting emerging and established artists from Central America, while bridging their art with the work of artists from elsewhere. I hope to contribute to this exciting new phase of DE LA CRUZ PROJECTS by helping to project their mission globally.”
Founded in 2012, DE LA CRUZ PROJECTS is an experimental art space based in Costa Rica dedicated to promoting emerging Central American artists and serving as a creative space for the region’s contemporary art. López-Chahoud adds his extensive curatorial experience to DE LA CRUZ PROJECTS, which is directed and was founded by Guadeloupe-born businesswoman, Véronique de la Cruz.  After being crowned Miss France in 1993, de la Cruz broke new ground in the worlds of fashion and culture, leading the way for other entrepreneurial women of color.
DE LA CRUZ PROJECTS is proud to announce its collaboration with Carter and Citizen on the upcoming exhibition The Glass Delusion, titled after a recent project and new sculptural work by Los Angeles-based artist John Espinosa.
Espinosa’s work will take center stage in the gallery, providing a platform and a visual and conceptual framework for a group of exhibited works by Andres Carranza, Alejandro Guzman, Franklin Evans, and Ernesto Oroza. The Glass Delusion will be a dynamic exhibition that includes a wide variety of media.
John Espinosa states:
“The sculpture that I am currently working on is part of an ongoing larger project that I have titled The Glass Delusion. In December 2008, I moved into a new studio space in the Glendale area of Los Angeles. A couple of months in, I decided to remove a built-in wall shelf that was eating up useful floor space. As I tore it down, the drywall behind the shelf started to crumble apart, revealing the studs and wall. To my surprise, also appearing behind the drywall were these interesting enigmatic marks painted on the black tar paper lining the concrete wall behind the studs. At first, I just thought that they were plumbing or electrical diagrams, but strangely enough some had figurative elements (an eye and a head) incorporated into the abstract linear diagram. I knew immediately that this could be source material for a future project. So, I documented the diagrams and then covered them back up with drywall. Then a few months later I began to plan a series of projects that were based directly on interpretations of the five discovered diagrams.
The sculpture in process for the Carter and Citizen exhibition is the second wave of objects based on the found drawings. Recently, my landlord revealed a bit of history of two of the prior tenants of the space. A jewelry maker used the space for 15 years; and prior to him she believes an artist used it for many years. So it is very possible either of these two people made the marks; or a random worker could just as easily have made the drawings during the construction of the structure. This new sculpture The Glass Delusion (Mirage Artifacts…Three Potentials) takes that history into consideration.”