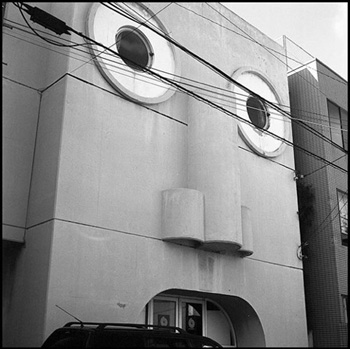 June 15–18, 2011
11:00–19:00
Facing the main hall at the Messeplatz, go to the red building next to Art Unlimited (to the left end of the fountain), look for the currency exchange and the kopfbau sign, enter through the time/bank.
e-flux has been invited to develop a special project for the Kopfbau during Art Basel. The Kopfbau (head building) is the oldest building in the Messeplatz complex, slated for demolition later this year. In response to this invitation, e-flux developed a constellation of projects situated somewhere between exhibitions of art and the concrete forms of sociality encountered in everyday life. Conceived as an independent universe with its own bar, hotel, shops, admissions, and so forth, this project operates in parallel, and as the inverse to the neighboring art fair: operating during alternative hours and in surprising and often paradoxical ways, and ranging in scope from the educational to playfully predatory and mercantile. Its component parts draw on a wide circle of institutions, artists, curators, and writers who have been involved with various e-flux projects over the past several years and comprise seven discrete projects, including:
Basel Pawnshop—both an exhibition and an artwork in itself, Basel Pawnshop mediates the complex choreography of art and money. As a fully functional pawnshop, it has an inventory of over a hundred art works, some made specifically for this occasion. Artists who have contributed to the Pawnshop include: Armando Andrade Tudela, Michel Auder, Michael Baers, Luis Berríos Negrón, Marc Bijl, Andrea Büttner, Annika Eriksson, Peter Friedl, Joseph Grigely, K8 Hardy, Christoph Keller, Annika Larsson, Kenneth Lum, Gustav Metzger, Darius Miksys, Gean Moreno & Ernesto Oroza, Bernardo Ortiz, Olivia Plender, Julia Scher, Tino Sehgal, Nedko Solakov, Eric Stephany, Jalal Toufic, Bik Van der Pol and Marion Von Osten among others.
A Guiding Light—Liam Gillick and Anton Vidokle stage and film Episode 2 of A Guiding Light, originally commissioned by the Shanghai Biennial and produced by New York’s Performa in 2010. The project combines a theoretical text by Franco Berardi (Bifo) with the structural analysis of a1952 episode of the television soap opera, Guiding Light, to stage a production that shifts between analysis and self-critique. Captured by several cameras, the resulting film preserves the soap opera’s signature stage blocking and repeated cuts, while highlighting the differences and difficulties encountered when attempting to capture the potential of art today.
Agency of Unrealized Projects (AUP)—a temporary office that exhibits a growing archive of several hundred unrealized art projects, comprising contributions received through an open call, as well those originally collated by Hans Ulrich Obrist and presented in the book Unbuilt Roads (1993). AUP presents works by Judith Barry, Heman Chong, Jimmie Durham, Yona Friedman, Philippe Parreno and many others.
Guesthouse Basel—a free, five-day residency for young artists, curators, critics and gallerists, organized in collaboration with Städelschule, Frankfurt, inspired by the legendary Gasthof event that took place in Frankfurt in 2004, during which Rirkrit Tiravanija and Daniel Birnbaum radically transformed the art academy into a free hotel for numerous young artists visiting Documenta in Kassel.
Time/Bank Currency Exchange—a Time/Bank outpost where time currency (designed by Lawrence Weiner) can be obtained in exchange for other currencies, biological time, ideas, services and commodities. Time/Bank proposes an alternative economy in which individuals and groups in the cultural fields can trade time, skills and commodities to get things done while circumventing money. www.e-flux.com/timebank
The Book Coop: e-flux journal & network—features art books, magazines and other types of publications from members of the journal network, a group of around 200 international art centers, art book stores and independent publishers that self-publish and distribute the print-on-demand e-flux journal.
Salon Aleman (the return!)—a rooftop bar inspired by the original Salon Aleman, the basement bar that operated from 2006–2007 in the basement of Unitednationsplaza, Berlin.