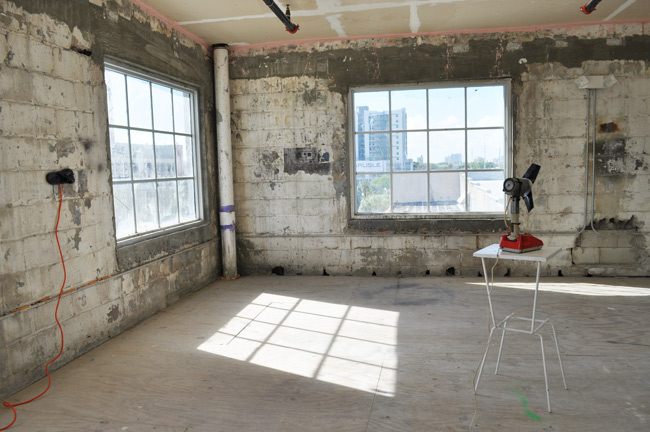 “Four Minutes, Thirty-Three Seconds” LegalArt, Miami. Curated by Omar Lopez-Chahoud. Press release
“Four Minutes, Thirty-Three Seconds” revisits the liberated attitude towards the creative process that defines the Fluxus movement. This project coincides with significant exhibitions happening at MOMA, NY; the Grey Art Gallery; NYU and at the Storefront for Art and Architecture, in collaboration with Performa 2011. This leads us to reflect on the similar attitudes between Fluxus actionists and a younger generation of artists as well as the socio-economic context in which these responses arise.

The title of this exhibition makes reference to a piece by composer John Cage, a notable influence on the Fluxus work of Lithuanian-born artist George Maciunas. Maciunas (1931-1978) organized the first Fluxus event in 1961 at the AG Gallery in New York City and the first Fluxus festivals in Europe. The Fluxus art movement in the 1960’s and 1970’s was characterized by a strongly Dadaist attitude, promoting artistic experimentation mixed with social and political activism. Often celebrated anarchistic change, Fluxus members avoided any limiting art theories and spurned pure aesthetic objectives. Their activities resulted in events or situations often called Aktions (works challenging the definition of art) and included performances, guerilla or street theater and concerts of electronic music, many of them similar to what in America were known as Happenings.

Omar Lopez-Chahoud has made use of his LegalArt residency as a lab for ideas, strategies and questions that organically shape the content of this exhibition. This project, like Cage’s composition, creates a potential space for creative energy and responses, facilitating a fertile dialog with the community outside of the traditional gallery venue. Publications produced by artists, curators, and art organizations will be available for research on the second floor of LegalArt. The exhibition continues on the fourth floor with multimedia installations and performances.

Rethinking home from a pragmatic and criminal perspective. I am using the electrical system to “redrawing” the house. The action is connected with thousands of gestures individules that reimagine the urban infrastructures.