Gean Moreno and Ernesto Oroza’s collaborative works question, test and “act out” ideas about the function of and tensions between objects, cities, exhibition spaces, art, architecture and design. Often visually simple and sparse, their projects for exhibition spaces have many layers.

These projects challenge the premise of design and artistic production, complicating our understanding of the relationships between makers and users. How do cultural influences, economic necessity, or any number of social, natural or political forces lead to new and unanticipated uses of places and things? What can we learn from the way ordinary people make use of milk crates, stereo speakers, buckets? What do we understand about changes in a city by looking at its salvage yards and civic auditoriums? Who or what makes a particular use or design official?

The artists write about these observations and publish them in newsprint tabloids that they distribute publicly as well as in art journals for specialized audiences. The ideas in these texts inform their visual/design projects; the tabloids become part of installations. These ideas also trouble the connections between the materials in the gallery or art journal—validating spaces—and their counterparts in the city and society outside.

The objects and materials in Driftwood act as double (or triple, or quadruple) agents. The wallpaper, screen structures, event posters and glass “paintings” extend or bend the energies at work in a Miami salvage yard and urban patterns of use: they are both art objects and salvaged/functional materials. They also modify the space, laying bare its functions: an institution has decided to use a space designed to be an auditorium or meeting space as an art gallery.

The patterned wallpaper is also a vehicle for discussing ideas. It folds into a tabloid containing an essay with images, Thirteen Ways to Look at a Salvage Yard, and a page that collapses into yet another publication, Freddy: examining the process by which a mass-produced object gets “derailed” for new uses. You’re invited to pick these up and take them with you—to read or to use for something else. 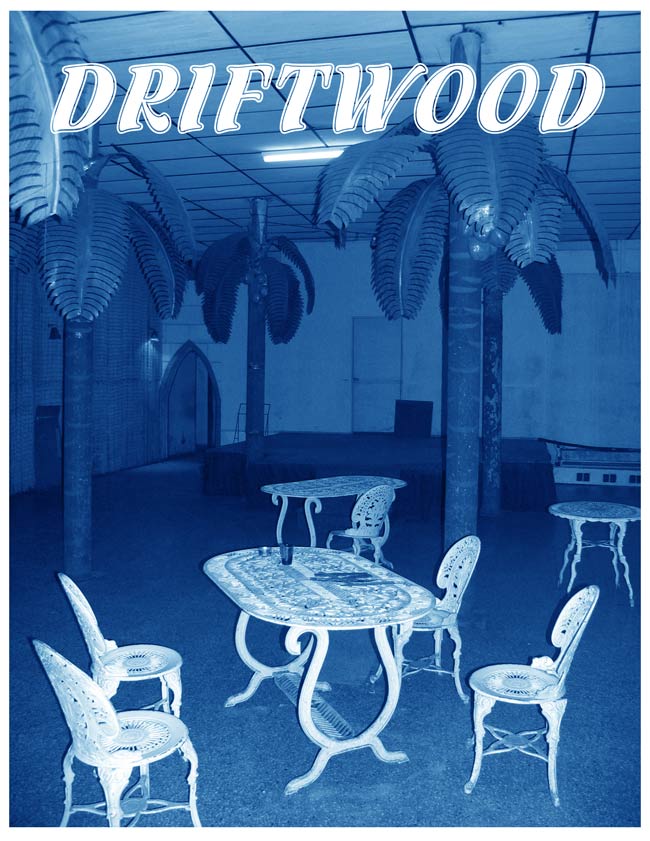