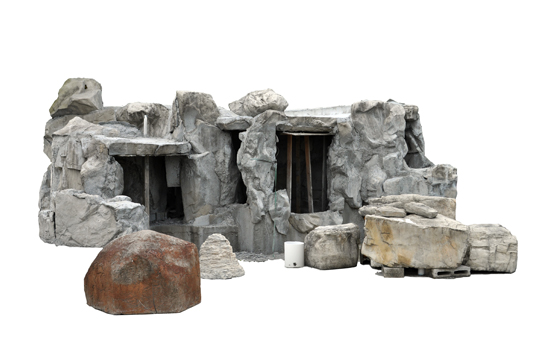 Gallery Diet is pleased to present Pre-City, a solo exhibition of collaborative works by Gean Moreno and Ernesto Oroza. With the works in this exhibition, Moreno and Oroza speculate on what they call the pre-city, a kind of abstract plane or pliable region made up of the different shapes and materials that determine what the city will look like. They propose that the city is already compressed in the range of materials, repeating objects and standard metrics found in construction material depots, lumber yards, roofing companies, landscaping nurseries, and home improvement stores. The pre-city is a series of codes that have yet to be arranged and coupled into larger assemblages. The exhibition will include “diagrammatic lamps”; “photographs” made out of materials printed in newspapers, magazine and catalogues; a new tabloid; domestic tableaux; and collages.

Gallery Diet is a contemporary art gallery located in the Wynwood District of Miami, Florida where it has existed since 2007. The gallery has produced over 25 solo and group exhibitions by new and emerging artists from around the world and has documented those exhibitions in hard cover print on a yearly basis. Represented artists include Charley Friedman, Christy Gast, Richard Höglund, Abby Manock, and Daniel Milewski.

For additional information or images please contact info@gallerydiet.com or 305.571.2288