OFF THE RECORD at Edge Zones Art Center-Miami 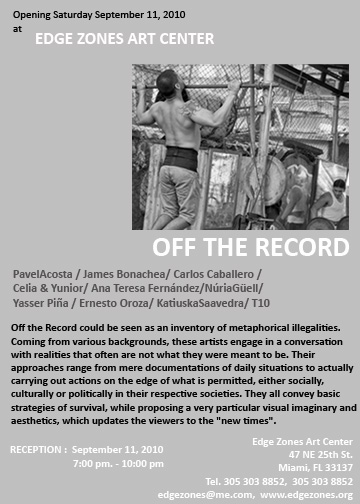 Curated by Anonymous Curators
Pavel Acosta/ James Bonachea/ Carlos Caballero/ Celia & Yunior/ Ana Teresa Fernández/ Núria Güell/ Glenda León/ Yasser Piña/ Ernesto Oroza/ Katiuska Saavedra/ T10
Off the Record could be seen as an inventory of metaphorical illegalities. Coming from various backgrounds, these artists engage in a conversation with realities that often are not what they were meant to be. Their approaches range from mere documentations of daily situations to actually carrying out actions on the edge of what is permitted, either socially, culturally or politically in their respective societies. They all convey basic strategies of survival, while proposing a very particular visual imaginary and aesthetics, which updates the viewers to the “new times”.
47 NE 25th St., Miami
305 303 8852
SEPTEMBER 2010