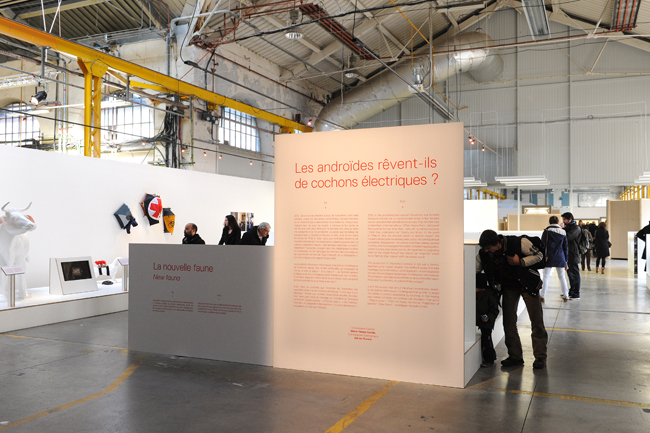 In 1976, in the story, Do androids dream of electric sheep?, Philip K. Dick prefigured a post-nuclear society where the few remaining animals on earth are supplanted by mechanical doubles created by man. It is impossible not to draw a comparison between K. Dick’s story and our own. For the author, man will come to the cruel conclusion that after having destroyed the animals, he can’t live without them.
K. Dick’s electric sheep have a direct filiation with Vaucauson’s mechanical duck, in 1739, which pretended to digest food. At the dawn of the 21st century, Sony has put together Aibo, a robot pet dog, which doesn’t always obey its master’s orders. In 2012, Robojelly roams about in the sea like a jelly fish to track down tankers which are illegally emptying their tanks. Will these artificial entities change the rapport between man and animals?
Over the course of history, the utility roles attributed to animals – hunting, agriculture, mobility – have been gradually taken over by technical solutions. Animals continue to be exploited for their meat, skin, fur, their organs, but at the same time they are absent from our lives. At a time when we are criticizing industrial systems, the relations between man and animals are being reconsidered. By means of a selection of artifacts, the “Androids” exhibition leads the visitor to reflect on his rapport with animals.