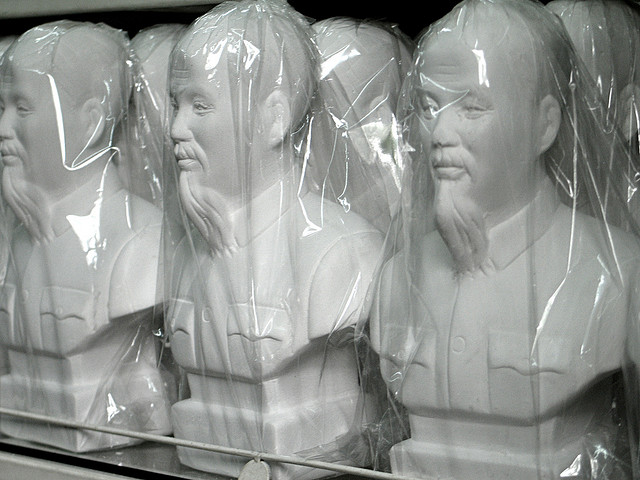 Wharton + Espinosa is pleased to present “Orange Tsunami,” the first West Coast solo exhibition of collaborative works by Miami-based artists Gean Moreno and Ernesto Oroza. With an opening reception on January 17 from 5:30-8:30PM, the show runs through March 8, 2013. As part of “Orange Tsunami,” Moreno and Oroza have published Tabloid #23 (download the PDF here).

As they have done in their previous research-driven projects, Moreno and Oroza begin by zeroing in on contemporary variations of an object typology — in this case, they began with the souvenir — in an effort to understand how it functions in relation to forces of contemporary production, the generation of urban morphology and identity, and the changing terrain of user engagement. In a previous project entitled Pre-City, for instance, they sought to understand how an abstract plane made up of the different but limited shapes, specific metrics, and repeating objects that make up the stocks of building depots, construction sites, landscape nurseries, home improvement stores, and even pet stores, becomes a determining set of codes and sequences that simultaneously constrains and open distortive new potentials in urban morphology and city production.

In physics, a moiré pattern is an interference or distortion created when two grids are overlaid at misaligned angles or slightly different mesh sizes. As part of their 2010 Quebec Biennial project entitled The Moiré House (Or, ‘Urbanism’ for Emptying Cities), Moreno and Oroza posited the “Moiré House” as a space where two or more functional fields meet to confuse and expand a house’s main function. The tense exchange of the incompatible demands placed upon it serves to become the structure’s most telling quality and dominant marker of identity. Economic downturns are often the accelerating contextual force that causes this form to proliferate. “Imagine diagramming the residential functions of a house as a pattern, and then imagine over­laying upon that a second pattern of functions usually not associated to the home: a ham-curing establishment, beauty salon, cake shop, scrap collection yard, or marijuana growing house.” The visual field of these superimposed functions, engaging these multiple patterns, produce a Moiré effect.

In “Orange Tsunami,” the artists use an invasive pattern of object organization, undermining the standard normally dictated by the gallery’s natural architectural shape. This complicates the design and layout of the existing structure to create a framework that skews the natural rigid logic of gallery constructs. It removes decision-making based on intuition and design codification to perpetuate this Moiré effect.

Gean Moreno’s cultural production is a multi-pronged attack that disseminates via individual and collaborative art practices, curation, writing and publishing. This prolific activity extends to murkier projects that include stage design for the Scat Metal band Gardy Loo! and a secretive semi-anonymous online science fiction novel that doubles as a post-apocalyptic virtual art gallery. Moreno’s individual artwork has been presented at Institute of Visual Arts, Milwaukee, Museum of Contemporary Art, Miami; Center of Contemporary Art, Glasgow; Derek Eller, NY; and Arndt and Partner, Berlin. The curatorial element of his production explores various species of this form of selective organization and presentation. Amongst these projects are Conditions of Display at the now defunct seminal South Florida alternative gallery The Moore Space; On Platforming at Locust Projects, Miami and Do not Torture the Rotten Ducklings at the Institute of Visual Art (INOVA) Milwaukee. He has contributed a range of texts — from speculative urban studies in Monu-A Magazine for Urbanism and the 2009 e-flux Reader (Sternberg Press, New York) to interviews with Peter Friedl for his collection of writings and political theorist Michael Hardt. Moreno’s writings have also been included in the catalogues for the exhibitions Uncertain States of America! (Astrup Fearnley Museum, Oslo), Round-Leather Worlds (Martin Gropius-Bau, Berlin), and Iñigo Manglano-Ovalle (Soledad Lorenzo, Madrid), among others. He is currently contributing editor of Art Papers magazine, sits on the editorial board of ArtUS, and has published in e-flux journal, Flash Art, and Art Nexus. In 2008 he founded [NAME] Publications.

Wharton + Espinosa is open to the public Monday-Friday from 11am-6pm and Saturdays by appointment. Enter Pacific Design Center’s Blue Building through the doors on Melrose, we are located on the second floor near the escalator. After hours or on weekends, please enter through the garage or San Vincente entrances and PDC’s concierge will direct you to the gallery. For more information, please write to us here: contact@wharton-espinosa.com or call 310.903.9566.