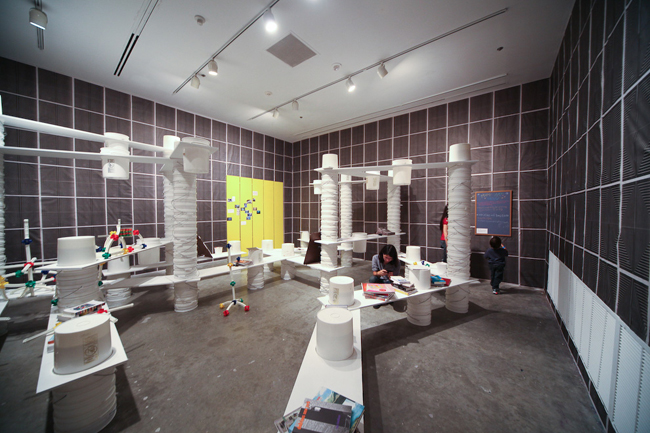 FREDDY (in collaboration with Gean Moreno)
Freddy is a coupling system that allows the production of numerous different architectural spaces and object typologies. It exploits standard plywood sizes and the stackability of the plastic bucket. Various iterations of the system exist.
It has been used to produce:
– an outdoor pavilion ( commissioned by the Bass Museum in October 2009)
– an outdoor pavilion ( commissioned by the Miami Art Museum, 2010)
– an indoor pavilion, of which two versión exist, one using 8’ x 4’ planes and the other using 16” x 96” planes
– a series of tables
– a series of display structures
– a pop-up shop/display kiosk
Freddy is linked to a larger research Project involved with the understanding and theorizing of generic objects as the function at multiple levels, from the circuits of global trade to their repurposing in low-income neighborhoods. A text on generic objects was published in E-FLUX JOURNAL 18.
Using repeating, standard units allows Freddy a certain flexibility in producing spaces with incorporated seating arrangements, tables, stools, lamps, trash bins, and display shelves.
Each of the patterns used in the planar modules is indexed by a different color.