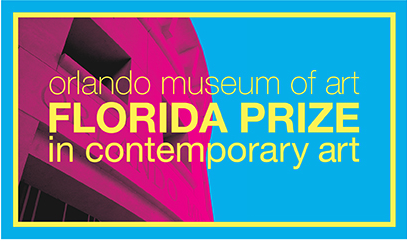 The Florida Prize in Contemporary Art is an initiative of the Orlando Museum of Art that brings a new level of recognition to the State’s most progressive artists. Now in its third year, the 2016 exhibition will present ten outstanding artists, with one selected to receive the prize. These artists work in a range of media and artistic practices, often in new and unexpected ways. The challenging nature of their work will offer Museum visitors insight into the complex and exciting world of contemporary art in Florida.

Technology and human geography are among the recurring themes examined by a number of this year’s artists. Some examples include mobile applications used by Matthew Roberts to create augmented reality experiences dependent on user location, tapestries by Noelle Mason that reproduce satellite images along the U.S. – Mexico border where human smuggling occurs, and video by Sergio Vega that explores an early Spanish Colonial author’s theory that the Garden of Eden was located deep in the Amazon River basin. These and many other works reflect the diversity of ideas and concerns that are brought together in the Orlando Museum of Art Florida Prize in Contemporary Art.