In 1994, in a factory in Los Pinos neighborhood in Havana, after a black-out, a Japanese machine used to produce medical instruments in acrylic got clogged with the hot, melted material inside. The factory’s chief of production quickly ordered all the acrylic, still in a liquid state, to be removed. As the workers pushed the material out, they created a fine cascade of melted pink acrylic that began to accumulated on the floor. Some of the workers, molding it with their hands, began to improvise the shapes of lamps, ashtrays and decorative bowls.
In a few weeks, this technical principle extended throughout the island and individuals began to assemble in their own homes machine that repeated this productive process in which hand gestures were fused with industrial technological principles.

I am interested in how immigrants interpret new technologies and the universal and standard stock of materials that can be found in stores like Home Depot. And how these “technological goods,” available to recent arrivals or to individuals formed in a different a “technological age,” start to insert themselves as possible variants in the home and within the immigrant’s dynamics of survival, in places like Little Haiti and Hialeah. In this sense, I am interested in investigating the meeting of this universal stock with local cultural demands, be they decorative impulses, constructive understandings, or simply religious practices. Processes of hybridization have the potential to open access to innovation, destroying and creating logics and sense, provoking excesses, invasions and reciprocal contaminations that have important repercussions in the city where they happen. 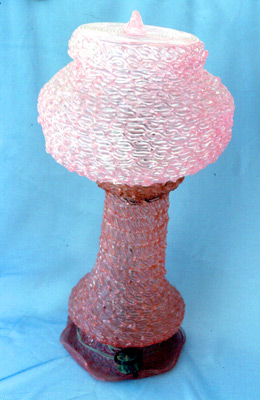 With this lamp project I revise some of Gaetano Pesce’s ideas regarding hybridity of productive processes. Pesce proposes that new technologies are more open to intersecting with variable elements that change their course. He has said, for instance, that computerized production systems should be invaded by viruses, algorhythms capable of inserting distortion into the repetition of mass production, material elements and mechanical forces that will always producing objects that are always different.

Technical info:
Technological Disobedience’s series: Lampshades, 2009
The lamps are produced in two sizes. Two or five tubes of clear silicone (10.1 Oz) are used, respectively.
The material is applied on geometric forms such as shoe boxes and bowls.
The object is completed with electric parts.
Prototype 1: 18”x12”x11”
Prototype 2: 10”x7”x9”