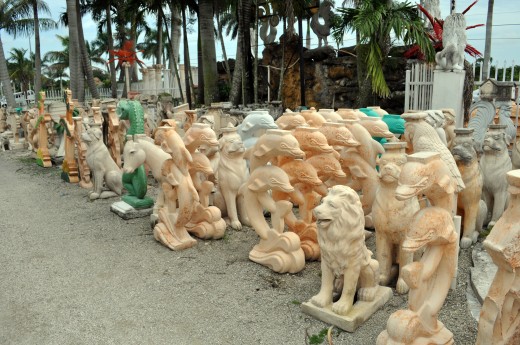 “…generic and ubiquitous elements of urban life that reveal the composition of the contemporary city as a distributed network of patterned practices.”

I walked twenty blocks from Wynwood to Downtown Miami before I took a car back along the same route an hour later. At a foot pace, the garages and open lots showed me their garbage, their tired weeds, their trucks parked at extravagant angles. The limp X where the train tracks meet North Miami Avenue was a real no-man’s land: left without a curb or a zebra, I scurried across to the safety of the shady sidewalk beside the cemetery. On the return drive, the street-level entropies receded from my sped-up gaze, which took in the horizons of high-rises, the persuasive lines of the city in its totality. Gean Moreno was driving. “Miami is an experimental ground for the investment of foreign capital in an American city,” he said. I mentioned the disbelief I had felt on my last visit to Miami, nearly five years earlier, that all the new construction would turn profit. But Moreno told me that an influx of Latin American money kept developers in business. It goes on. He told me about the Singaporean company pouring three billion dollars into a casino. And yet, some of the big buildings we drove past were empty, their ground floors cinder-blocked and fenced in to keep out squatters. Even at forty miles an hour the city has visible chinks that describe the forking paths of plans and life.

Moreno and his collaborator Ernesto Oroza pay close attention to Miami’s frayed urban fabrics and the spontaneous actions applied to mend them. They document them in the Tabloid, a series of newsprint publications produced in conjunction with installation projects. The latest issue is a study of “moiré houses”: homes used as part-time barbershops or bakeries, whose functional zoning flickers between residential and business, like the optically unstable overlaid grids of a moiré pattern. Other installments have examined the repetition of faux-stone ornament, Royal Palms in lobbies, sidewalk speaker systems—generic and ubiquitous elements of urban life that reveal the composition of the contemporary city as a distributed network of patterned practices. In Moreno and Oroza’s installation, the accumulation of found sculptures and the repeating designs of the newspapers covering the wall make this vividly palpable, while elevating the visibility of local practices scaled to human bodies over the busy geometries seen on Google Maps. “Whereas the global approaches of modern architecture relied on criteria extrapolated from an imaginary and ideal future, these new practices aim to start with an understanding of what exactly is needed and possible at a local level,” they wrote in “Learning from Little Haiti,” a 2009 essay for e-flux journal. “Teleology is replaced with radical pragmatics.”

“feeling bad for all my NYC friends who can’t experience the joy of @Walmart”: This is a tweet from Manuel Palou, or @artnotfound, that I read last May, when he made a Miami Walmart his studio and gallery. He discovered that the length of the pool noodles matched the width of the store’s aisles, and used them in installations that blocked passage through the toy section. He took a dozen pairs of black galoshes off the shelf and arrayed them in a militant row on the floor. He took photographs of his handiwork and sent them to Twitter immediately. “Literally been in @Walmart’s toy section for like an hour now and loving it,” he announced. “@artnotfound Our toy section does have a great selection,” came a reply from Walmart’s account. “Hope you found everything you were looking for!” Twitter offers the potential for fleeting personal contact with a big-box brand—though as Palou’s interaction shows, the brand’s polite distance can make this contact absurd. The cheery emptiness of Walmart’s reply echoes the way the corporation’s development plans respond to aggregates of urban populations. Search for “Walmart Miami” on Google Maps, and the city turns into a crater, dotted with Walmart’s pips along the ring. Its brand is about antiseptic convenience, but if you go to a store (or make a vicarious visit via www.peopleofwalmart.com) you find the fragrance of disinfectant mixed with body odor and snack foods. The cheapness percolates up through the floor plan’s orderly grid. Palou’s ephemeral sculptures exaggerated and relished the weirdness of these juxtapositions.

Palou collaborates with Moises Sanabria on the art duo Art404. Their exploits have included loading a one-terabyte external hard drive with $5 million worth of pirated media, provoking a member of the hacker group Anonymous to take down Gagosian.com, and riffing on Damien Hirst’s spot paintings by making prints that follow the rules Hirst devised for his fabricators but replace the spots with round brand logos. Some of their projects may come off as puerile. (When I was in Miami, Palou showed me pictures on his phone of a sculpture he’d made from marijuana; he had manipulated the installation shots in Photoshop to make it look enormous.) But even so, they pointedly articulate a symbiosis between technologies of order—whether in information networks or urban architectures or the zones where the two meet—and the creative activity generated at their nodes and gaps. In that regard, they share a sphere of interests with Moreno and Oroza, even if their approaches differ dramatically. They prefer action over research as a mode of art-making, Twitter over e-flux journal as a platform of public address.

“I love Walmart,” Palou told me when we walked along the train tracks in Wynwood. “I love McDonald’s!” His fascination with brands involves both enthusiastic use of their services and awe at their monumental ubiquity. It’s an inversion of the quiet study of unbranded, generic production at the center of Moreno and Oroza’s work. In his studio, Oroza has a heavy plastic flip-flop hanging on a wall, with the ends of a split extension cord poking through two holes. “It’s a cigarette lighter,” Oroza explained. “But if you use it, the power in the building will go out.” On another wall hangs a pocketbook of woven soda-can tabs. When Oroza was still living in Cuba he compiled a catalog of improvised objects like these, tools and treasures assembled from whatever was at hand in a Walmart-less economy. These objects are appealing because the hand of the person who made them is visible, and poignantly so against the invisible industrial labor that produced the factory-made component parts. They express the persistence of spontaneous creativity in an industrialized economic framework.

Though they work in an environment of abundance, Art404 sometimes artificially create scarcity as a conceptual gesture. For their recent project “1 man 1 phone” (2012), Palou left his home on a Saturday morning with nothing but his phone and a charger, and became “homeless” for the weekend. He made a new Twitter account, @1man1phone, and used it to solicit strangers for food and shelter. His refrain: “I am Manny, a local homeless artist who could really use a meal. Could you help me out with some food?” As he tweeted this at other users in Miami, he walked around the city in search of available outlets so he could keep his phone charged. Sanabria was at the Conflux Festival, an annual weekend-long exhibition of performance and interventions in New York, running a projector with the Twitter window open and a map tracking Palou’s movements.

@1man1phone received some sympathetic replies. “thats pretty interesting. i hope you dont starve cuz unfortunatley society is in sympathical ruins!!!” wrote one. “i dnt think many homeless have phones,” said another. “you have pretty good grammer for a homeless guy” was another skeptical reply. Women who received his tweets said they’d be happy to help, but they worried he could be a predator. At least one user reported @1man1phone to Twitter and it was suspended just hours after it had been opened. Twitter’s Terms of Service lists violations that lead to suspension, but keeps it flexible: “What constitutes ‘spamming’ will evolve as we respond to new tricks and tactics by spammers.” Palou was perhaps guilty of sending “large numbers of duplicate @replies or mentions,” or maybe his tweets were identified as harassment. In a city where signs proclaim “No Panhandling Zone,” Palou experimented with begging on another system, and soon found new restrictions there. (His second account, @homelessmanny, managed to survive online until Sunday night when the project ended.) But offline he was inconspicuous. He still looked like a consumer. He could slip into the public bathroom at Staples where, to his delight, he found an electrical outlet and a shower, and satisfied the physical needs of his phone and himself.

In “1 man 1 phone,” Art404 acted out the alignment of urban space and information networks. I think of the work as a performative variation on Moreno and Oroza’s installations, where they visualize distributed and repeating connections by wallpapering their patterned tabloids around found sculptures. “The non-space of the ATM kiosk is no different from the collection of any-space-whatevers that constitute the cookie-cut corporate campuses of Omaha, Nebraska; Mumbai; and Santiago,” Moreno wrote in “Notes on the Inorganic,” published by e-flux this year. “[B]oth float freely, severed from their contexts, structured for particular ends.” Space becomes information. Consumers become information, too, as encounters between people and their urban environments are expected to be fast, transient, and gainful. Walmart wants its aisles to guide its guests through an easy shopping experience. Twitter generates individualized suggestions of users to follow, whose updates and links will be useful, at least as entertainment value. The problem of homelessness is not “nowhere to live” but “nowhere to go”: it begets lingering presence in the city’s channels of movement; it generates social and economic transactions that appeal to emotions less goal-oriented than desire. Spam clogs the Twitter feed, distracting users from their information consumption, vaguely threatening them with viral infections. The identification of homelessness and spam in “1man1phone” paths evoked the slightness between expectations of the navigation of internet space and movement in the city, and how one man with one phone builds connections amid the online and offline fields of the any-space-whatevers. Taken together, the work of Gean Moreno and Ernesto Oroza on one hand and Art404 on the other construct a panorama of the systems that govern everyday life and the people who negotiate and respond to them, across a broad spectrum of images and voices.