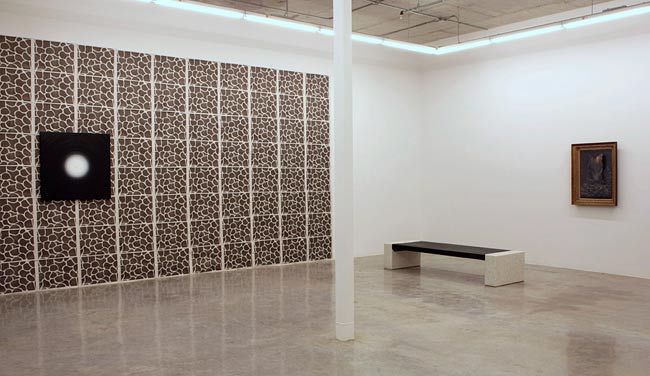 Bhakti Baxter, Nicolas Lobo, Gean Moreno, Daniel Newman, Ernesto Oroza, and Gavin Perry will be featured in the exhibition, Spit-Polishing a Starless Sky/Outer Space, at Charest-Weinberg Gallery, from September 12 through October 5, 2009. The opening reception will be on September 12 from 6pm to 9 pm at 250 NW 23rd Street, Space 408, Miami, FL 33127.

The exhibition is comprised of two different exhibitions that have been superimposed without any attempt to make them cohere. Two sets of information have simply been brought together, and the resulting form of the exhibition will be determined by the very dynamics of their interaction.

The first exhibition, Spit-Polishing a Starless Sky, is made up of black or nearly-black paintings by Bhakti Baxter, Daniel Newman and Gavin Perry. In the work of all these painters, the black monochrome is entwined with references that belong in cultural spheres that exist far away from formalist concerns. In Baxter’s case, the black paintings double as images of macroscopic phenomena and have a scientific flavor. In Perry’s work, the black monochrome is literally the high-end side of paintings that also trade in lowbrow referents and objects, like cheap rugs and souped up cars. With Newman, the black glaze is all process. He has covered over 200 found paintings with black, turning a gesture characteristic of iconophobia into a delirious flow of production. In a sense, in the work of all these painters, two sets of information are already blended. Each of their works becomes a stand-in for the overall structure of a double-exhibition with incompatible or competing halves.

The second exhibition, Outer Space, titled after a 1999 short film by Peter Tscherkassky, will be made up of sculptural proposals by Nicolas Lobo and Giancarlo Sardone, and Ernesto Oroza and Gean Moreno. Each of these collaborative projects begins with elements provided by the technologies, conventions and infrastructure that form the invisible materiality of our social space. Working through all the engineering problems and ontological recoding that rendering a virtual artifact in actual space brings, Lobo has collaborated with terrazzo mason Sardone to produced a real-life double of a standard bench that can be found ready-made in the design program SketchUp. As the bench took shape, its proportions began to feel slightly off due to some distortion caused the Sketchup rendering engine. What looked like a perfectly bland bench on screen takes on an uncanny air in our physical space. Oroza and Moreno will use the tabloid, of the sort found throughout the city’s neighborhoods, to create both a “catalog” and an ornamental wallpaper pattern from forms determined by the exhibition itself that will, in turn, activate the supposed neutral walls of the space.

All the artists in the exhibition are part of Miami’s burgeoning scene. They have all exhibited their work internationally and are represented in the collections of major museums. This will be the first time their work is shown at Charest-Weinberg Gallery, whose reputation continues to grow as Miami’s premier venue for emerging art.