I want to do a research on the material culture that has given form and meaning to the Vizcaya, from its origins as a home, up to present as a museum.

I recognize that the Vizcaya was an accomplishment desire of James Deering to found a village in a virgin natural context, inspired by archetypes of comfort and social exchange of different places and times. I consider that the Architectural and Interior Design projects that was conceived and directed by Paul Chalfin in this place, has been the vehicle for this foundation process. In this way, the topics that are more interest to me of the historical material of the history of Vizcaya are: the very idea of the foundation itself, the models (archetypes) and the means (Interior Design and Architecture) by which this foundation process was consolidated.

I have found in the Archetype concept, a very important parallel between the history of the Vizcaya and the “objects of necessity” in which I’ve always been interested since I lived in Cuba. In my book, Reinvented Objects, I dedicated a chapter to the idea of Archetype and its function in the works of reconstruction the habitat, which during the economic crisis affected the island for several decades. I consider that the Vizcaya and the Cuba of the 90’, although characterized by opposed material cultures, they share in the archetype a possibility to restart, a hope.

With my research I intend to “re-found” the Vizcaya, virtually speaking. For this, I will use the Interior Design as a theoretical tool to analyze and to project new ways to associate and interpret the objects and spaces of the museum. I’m specifically interested in the capacity of the Interior Design and the Architecture to build meanings and knowledge by means of the space and the relationship with the human being that inhabits it.

My investigation will result in three materials: a Video Library, a Book, and a Map.

VIDEO LIBRARY: – I want to collect, to classify and to return the Vizcaya, systematically, those digital videos filmed during visits, family celebrations (weddings, birthday, quinceaneras) and social events happened in the spaces of the museum. The videos that interest me are those that have been up loaded to Youtube during the last years. In these videos, we can observe new uses of the Vizcaya and a continuous re-interpretation of the place by the community. Each architectural object, each area of the garden and of the building, each perspective is objects of a process of family appropriation that reinvent the place inserting it in a new narrative. The videos accumulated in Youtube have been processed with effects, animations, re-alignments, texts and sound bands that complete this practice of absorption or digestion of the Vizcaya for the family and collective imaginary. With this re-collection I seek to connect the physical universe of the Vizcaya with the digital sphere of Youtube and with the private environment of the family memoirs. I pretend to design a program of video projections at the garden of the museum.

BOOK: – The book will contain the texts, diagrams, collages, pictures of my projects of re-interpretation of this village. It will have from 60 to 120 pages and an approximate format of 8″x 10.”

MAP: – The map will be printed, with a minimum format of 22″x17″, will be the means to link this project directly with the visitors of the museum. One side of the map will contain “guides” or suggestions on how to “walk” and “to be” in the Vizcaya. On the reverse, the map will contain a scanned graphic pattern that will document some important element of the place. The pattern will have the potentiality, when multiplying, of producing ornamental surfaces as wallpapers, carpets etc. With this map-pattern I will be adding a new object to the material history of the museum and at the same time enabling a new relationship of the Vizcaya with the metropolis that embraces it. People with these maps will be carrying, potentiality a practical model of expansion of the Vizcaya toward Miami. In the future, the pattern will be integrated into the domestic environment of the city, everything will be covered by these decorative surfaces and the dreams of Deering and Chalfin will flood the city. 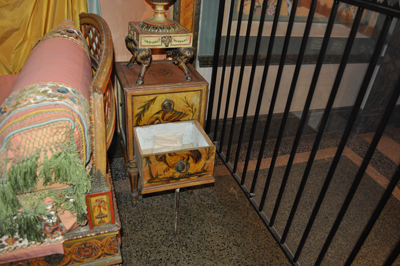